Burt Reynolds, Put the Pedal to the Metal : How a Nude Centerfold Sex Symbol Seduced Hollywood 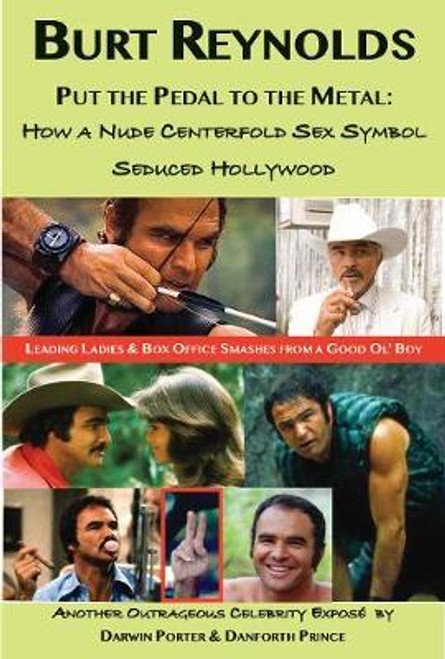 In the 1970s and '80s, Burt Reynolds represented a new breed of movie star: Charming and relentlessly macho, he was a good ol' Southern boy who made hearts throb and audiences laugh. He was Burt Reynolds, a football hero and a guy you might have shared some jokes with in a redneck bar. After an impressive but tormented career, rivers of negative publicity, a self-admitted history of bad choices, and a spectacular fall from Hollywood grace, he died in Jupiter, Florida, at the age of 82 in September of 2018. Once, he posed nude for a woman's magazine. Even though, by his admission, it ultimately hurt his career, fan mail from horny females poured in from across the nation. For five years, both in terms of earnings and popularity, he was the number one box office star in the world. Smokey and the Bandit (1977) became the biggest-grossing car-chase film of all time. As he put it, perhaps as a means of bolstering his image, "I like nothing better than making love to some of the most beautiful women in the world." He was referring to his sexual involvements with Catherine Deneuve, Farrah Fawcett, Dolly Parton, Cybill Shepherd, Tammy Wynette, Lucie Arnaz, Kim Basinger, Candice Bergen, Lauren Hutton, Lorna Luft, Sarah Miles, Angie Dickinson, Elizabeth Taylor, or Marilyn Monroe, whom he once picked up on his way to the Actors Studio in New York City. He also hung out with Bette Davis. ("I always had a thing for her.") Love with another VIP came in the form of that "Sweetheart of the G.I.s," Dinah Shore. Their May-September affair sparked endless chatter. "I appreciate older women," he once said in a moment of self-revelation. He entered another much-publicized romance with actress Sally Field, the "second love of my life." After his death, The Flying Nun said, "Burt still lives in my heart," but then expressed relief that, because of his recent death, he'd never read what she'd said about him in her memoir. Men liked him too: He played poker with Frank Sinatra; shared boozy nights with John Wayne; intercepted a "pass" from closeted Spencer Tracy; talked "penis size" with Mark Wahlberg; went "wench-hunting" with Johnny Carson; and threatened to kill Marlon Brando, to whom his appearance was often compared. His least happy (some said "most poisonous") marriage--to Loni Anderson--was rife with dramas played out more in the tabloids than in the boudoir. According to Reynolds, "She's vain, she's a rotten mother, she sleeps around, and she spent all my money." This biography--the first comprehensive overview of the "redneck icon" ever published--reveals the joys and sorrows of a movie star who thrived in, but who was then almost buried by the pressures and insecurities of the New Hollywood. A tribute to "truck stop" America, it's about the accelerated life of a courageous spirit who "Put His Pedal to the Metal" with humor, high jinx, and pizzazz. He predicted his own death: "Soon, I'll be racing a hotrod in Valhalla in my cowboy hat and a pair of aviators." On his tombstone, he wanted it writ: "He was not the best actor in the world, but he was the best Burt Reynolds in the world." Publicity from tabloids and mainstream media will accompany the release of this book, along with radio interviews targeted to Nashville and other country-western markets and videotaped book trailers illustrating the ironies of his rags-to-riches-to-rags saga.