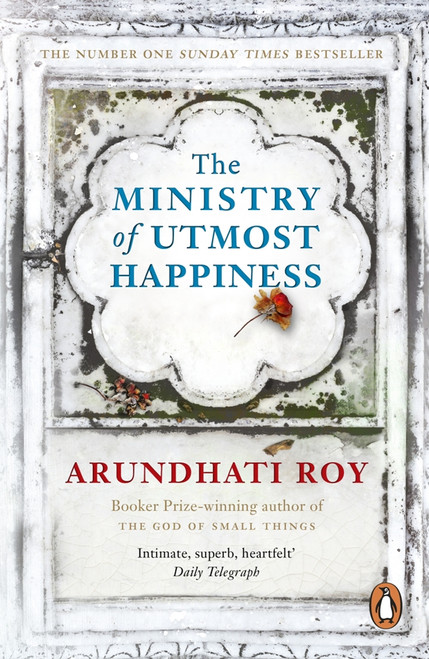 'How to tell a shattered story? By slowly becoming everybody. No. By slowly becoming everything.'
In a city graveyard, a resident unrolls a threadbare Persian carpet between two graves. On a concrete sidewalk, a baby appears quite suddenly, a little after midnight, in a crib of litter. In a snowy valley, a father writes to his five-year-old daughter about the number of people that attended her funeral. And in the Jannat Guest House, two people who've known each other all their lives sleep with their arms wrapped around one another as though they have only just met.
Here is a cast of unforgettable characters caught up in the tide of history. Told with a whisper, with a shout, with tears and with laughter, it is a love story and a provocation. Its heroes, present and departed, human and animal, have been broken by the world we live in and then mended by love -- and for this reason, they will never surrender.

"We begin with Anjum, who has taken up residence, for reasons that gradually unfold, in a graveyard, where she lives “like a tree” (part of the natural world, unspeaking, all-seeing is one interpretation; attempting to avoid notice another), but also as a “mehfil”, “a gathering. Of everybody and nobody, of everything and nothing. Is there anybody else you would like to invite? Everyone’s invited.” And indeed, over the course of the novel, Anjum’s graveyard home comes to function as a secular, or at least multifaith, sanctuary, protected by willpower from the turbulent outside world.

The word that more frequently attaches to Anjum is “hijra”, a Hindu word that variously translates as hermaphrodite (Anjum, born Aftab, herself has both male and female sex organs, until she undergoes surgery), eunuch, third gender and transgender person. From early adolescence, Anjum has lived in the Khwabgah, which can mean, straightforwardly, sleeping quarters, or house or palace of dreams; for her, it has been the latter, a place of liberation and self-expression. The other hijras who live there form a family, even those who, like Saeeda, “could speak the new language of the times – she could use the terms cis-Man and FtoM and MtoF”, and in doing so edges Anjum – one of “the old exotics” – out of the “Number One spot in the media”.

But not far into the novel, the faint hint of Tales of the City departs. On a visit to a Gujarati shrine, Anjum is caught up in a massacre of Hindu pilgrims and subsequent government reprisals against Muslims, and retreats – at least temporarily shedding her brightly coloured clothing for a more masculine Pathan suit – to the graveyard. Her immurement, however, signals the novel’s sprawling expansion." The Guardian

The Night Ocean : A Novel