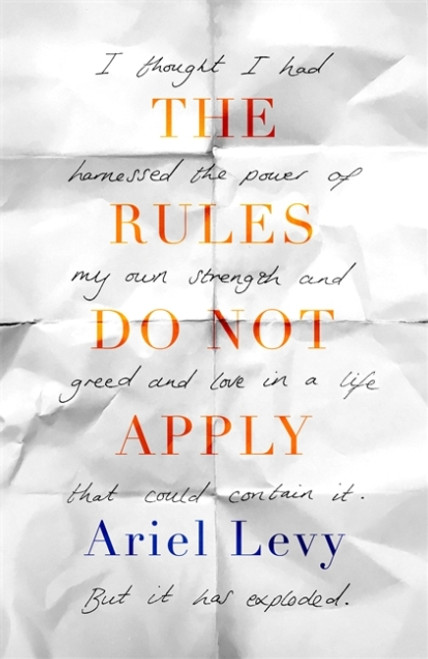 All her life, Ariel Levy was told that she was too fervent, too forceful, too much. As a young woman, she decided that becoming a writer would perfectly channel her strength and desire. She would be a professional explorer—“the kind of woman who is free to do whatever she chooses.” Levy moved to Manhattan to pursue her dream, and spent years of adventure, traveling all over the world writing stories about unconventional heroines, following their fearless examples in her own life.

But when she experiences unthinkable heartbreak, Levy is forced to surrender her illusion of control. In telling her story, Levy has captured a portrait of our time, of the shifting forces in American culture, of what has changed and what has remained. And of how to begin again.

An award-winning journalist tells the story of how her formerly charmed life in which “lost things could always be replaced” came to a brutally abrupt end.

In the late 1990s, Levy (Female Chauvinist Pigs: Women and the Rise of Raunch Culture, 2005) was a young assistant at New York magazine trying to make it as a writer. “Greedy…like a hungry cat” for success, she aggressively sought out the connections that led to more high-profile assignments and eventually, in 2008, a coveted position as a staff writer at the New Yorker. By this time, she was living the promise of second-wave feminism that women “could decide for ourselves how we would live, what would become of us.” Not only did she have a thriving writing career that took her around the world and made her the toast of New York literary circles. She had also defied convention: at a time when gay marriage was not yet legal, she married a woman. Lucy was the love of her life and the person to whom she had sworn her first, but not only, allegiance. As though to prove her sexual freedom, Levy then had an affair with a trans man and confessed it to Lucy, who began drinking heavily. “I lived in a state of bewilderment punctuated by fury and aching guilt,” she writes. As their broken relationship began to mend, a male friend looking to become a parent “but…at a distance” agreed to donate his sperm to Levy, who successfully became pregnant. Yet the shadow of Lucy’s alcoholism hung over her life. While on assignment in Mongolia, the author lost her baby, and her marriage to Lucy imploded not long afterward. The honesty with which Levy confronts her youthful hubris and its consequences makes powerfully compelling reading. With dignity and grace, this former golden girl eloquently acknowledges how the fact that “everybody doesn’t get everything” in life is “as natural and unavoidable as mortality.”

Would You Rather ? : A Memoir of Growing Up and Coming OUt

After The Parade : A Novel

The Upside of Unrequited Love