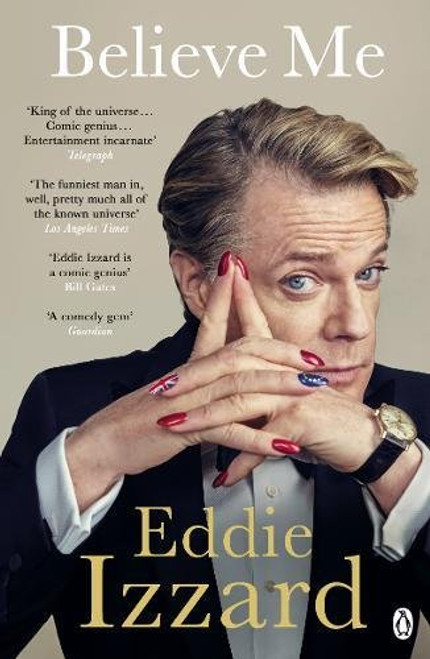 Eddie Izzard, the celebrated comedian and actor has always been well known for his transvestism, but he now identifies as transgender and is a proud campaigner for trans visibility and rights. His new autobiography tells the story of how a boy who wanted to become a professional footballer and win the lead in Joseph and His Amazing Technicolour Dreamcoat found comedy, and the courage to be his true self.

When Eddie Izzard was six, he lost his mother to cancer. That day, he lost his childhood too. Despite or perhaps because of this, he has always felt he needed to take on things that some people would consider impossible. He said that he knew he was a transgender person[17] at the age of four, after watching another boy being forced to wear a dress by his sisters, and knew he wanted to be an actor at the age of seven.

In ''Believe Me'', Eddie takes us on a journey which takes us from Yemen to Northern Ireland to England, then across the seas to Europe and America. In a story jam-packed with incident, he tells of teddy bear shows on boarding school beds, renouncing accountancy for swordfighting on the streets of London and making those first tentative steps towards becoming an Action Transvestite.

Above all, this is a tale about someone who has always done everything his own way (which often didn't work at first) and, sometimes almost by accident but always with grit and determination, achieving what he set out to do. Brimming with the surreal humour and disarming candor of his shows, ''Believe Me'' tells the story of a little boy who lost his mother, yet who has risen to become a star of comedy and drama, a leading advocate of charities and human rights, and extreme runner of marathons (he raised 1.3 million pounds for Sport Relief in 2016 doing 27 marathons in 27 days).

Affecting, witty and nothing less than rousing, readers will, as Eddie himself says, "look at my life and say, 'If that idiot transvestite can run a whole bunch of marathons, play the Hollywood Bowl, and travel across France with a French-speaking tour, then what's holding me back?''

The Reminders (B Format Paperback)