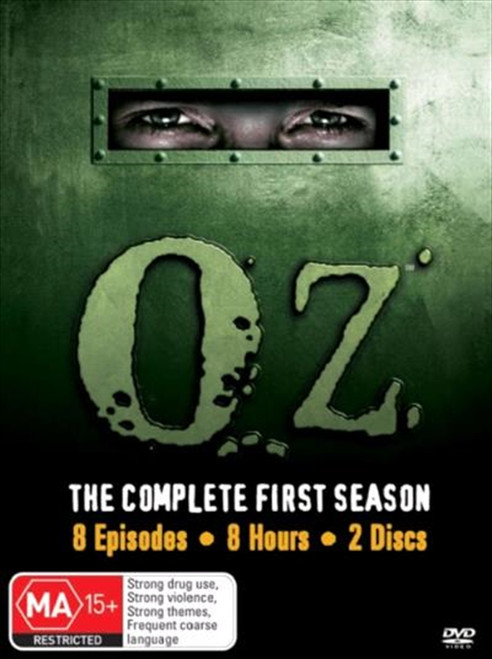 HBO's violent men-behind-bars drama is an addictive, testosterone-driven soap opera for guys. The eight episodes of the first season set the style for the show: a massive cast of a vivid characters on both sides of the bars, four or five stories unleashed at a breakneck pace and framed by angry, oddball introductions, and a soaring casualty rate. Created by Homicide producer Tom Fontana, this drama quickly earned its rightful reputation as the most brutal show on TV. It's simple chemistry: combine volatile ingredients in a confined space, shut tight, and shake.

The yellow brick road of the Oswald Correctional Facility (affectionately known as "Oz" among the inmates) leads to "Emerald City," an antiseptic cellblock of cement and glass overseen by prison-reform advocate Tim McManus (Terry Kinney). The first episode introduces its two most compelling inmates: meek lawyer Beecher (Lee Terguson), who transforms from a vulnerable lamb to a fearless, drug-addicted wildcat, and Muslim activist Kareem Said (Eamonn Walker), a fiercely non-violent leader whose campaign for reform explodes in a season-climaxing riot. The stunning first-season cast also features Ernie Hudson (the warden), Rita Moreno (a worldly drug-counseling nun), and Edie Falco (who jumped from her role as a single-mother prison guard to mob wife in The Sopranos). It carries no rating, but the drug use, nudity, and brutal violence make this highly inappropriate for young viewers and unsuited to the squeamish. Oz pulls no punches in its portrayal of prison violence and predatory abuse.

The Alienist Season One DVD