A Queer New York: Geographies of Lesbians, Dykes, and Queers 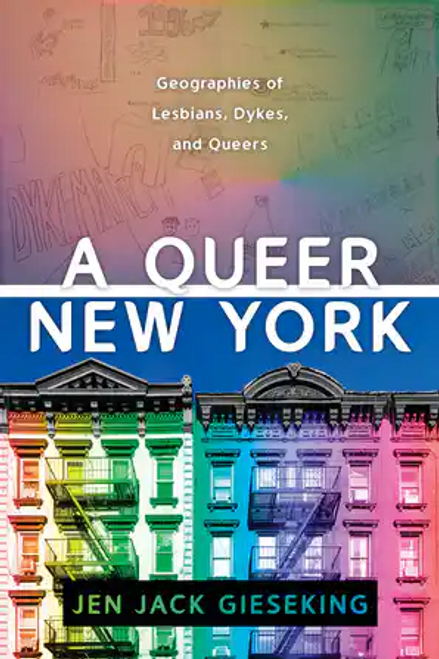 Over the past few decades, rapid gentrification in New York City has led to the disappearance of many lesbian and queer spaces, displacing some of the most marginalized members of the LGBTQ+ community. In A Queer New York, Jen Jack Gieseking highlights the historic significance of these spaces, mapping the political, economic, and geographic dispossession of an important, thriving community that once called certain New York neighborhoods home.

Focusing on well-known neighborhoods like Greenwich Village, Park Slope, Bedford-Stuyvesant, and Crown Heights, Gieseking shows how lesbian and queer neighborhoods have folded under the capitalist influence of white, wealthy gentrifiers who have ultimately failed to make room for them. Nevertheless, they highlight the ways lesbian and queer communities have succeeded in carving out spaces—and lives—in a city that has consistently pushed its most vulnerable citizens away.

Beautifully written, A Queer New York is an eye-opening account of how lesbians and queers have survived in the face of twenty-first century gentrification and urban development.

"In A Queer New York, Jen Jack Gieseking offers a stunningly trenchant and much needed study of lesbian-queer spaces in the city. He deftly demonstrates how place and belonging can be mapped into lesbian-queer generational shifts. With light, elegant, and sometimes humorous prose combined with an incisive analytical approach, Gieseking showcases the processes of urban emplacement and displacement of lesbian-queer lives and bodies from Greenwich Village to Crown Heights to Park Slope. A fabulous geographical portrait of an-other Big Apple." ~Martin F. Manalansan IV, author of Global Divas: Filipino Gay Men in the Diaspora

Uncomfortable Conversations With A Black Man