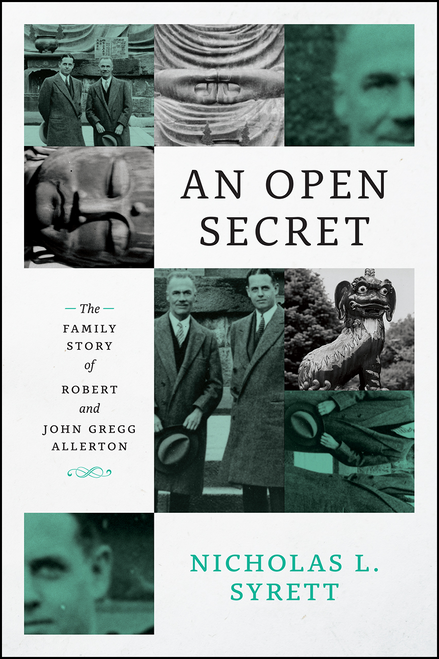 In 1922 Robert Allerton—described by the Chicago Tribune as the “richest bachelor in Chicago”—met a twenty-two-year-old University of Illinois architecture student named John Gregg, who was twenty-six years his junior.

Virtually inseparable from then on, they began publicly referring to one another as father and son within a couple years of meeting. In 1960, after nearly four decades together, and with Robert Allerton nearing ninety, they embarked on a daringly nonconformist move: Allerton legally adopted the sixty-year-old Gregg as his son, the first such adoption of an adult in Illinois history.

An Open Secret tells the striking story of these two iconoclasts, locating them among their queer contemporaries and exploring why becoming father and son made a surprising kind of sense for a twentieth-century couple who had every monetary advantage but one glaring problem: they wanted to be together publicly in a society that did not tolerate their love. Deftly exploring the nature of their design, domestic, and philanthropic projects, Nicholas L. Syrett illuminates how viewing the Allertons as both a same-sex couple and an adopted family is crucial to understanding their relationship’s profound queerness. By digging deep into the lives of two men who operated largely as ciphers in their own time, he opens up provocative new lanes to consider the diversity of kinship ties in modern US history.

"An Open Secret explores what lies beneath the relationship between Chicago’s richest bachelor Robert Allerton and John Gregg, who was twenty-six years his junior. In 1922, Allerton met Gregg, who was still studying architecture at the University of Illinois. Unexpectedly, they became an inseparable couple and publicly addressed one another as father and son. In 1960, when Allerton was approaching ninety, he made the controversial decision to legally adopt Gregg as his son, marking this move as the first adoption of an adult in the history of Illinois. In this book, Nicholas L. Syrett follows these men's lives and situates them within the context where gay couplehood and marriage were still out of reach. Their decision to live together as father and son also signals how the forms of homosexual relationship and kinship are also an outcome of a particular moment in history determining what is and what is not possible to pursue. The Allerton’s wealth is also perhaps a strong factor that protected the couple from society's prying eyes, revealing how social class, race, and queerness often operated together to shield or even to stigmatise particular queer individuals. Finally, An Open Secret alsoaptly brings a critical view on the gay intergenerational relationship. It reveals how same-sex love was transformed into familial ties but also into an open secret where the boundary between knowingness and unknowingness was always in suspension."

“Syrett’s expert portrait shakes up modern assumptions about queer coupledom. His richly nuanced interpretation reveals that the kinship claim of these men was not merely a front to hide their sexuality, but a deeply meaningful structure for their emotional and physical intimacy. Not quite the story of a same-sex marriage, An Open Secret shows that the history of male same-sex companionship is much queerer indeed.”-Rachel Hope Cleves, author of Unspeakable: A Life beyond Sexual Morality

“Syrett escorts us into a world of wealth and privilege and creatively examines the decades-long intimacy of Allerton and Gregg. Filled with surprising revelations, Syrett’s account offers a new angle on the forms that queer life and love has taken in the past.”-John D’Emilio, author of Queer Legacies: Stories from Chicago’s LGBTQ Archives
×