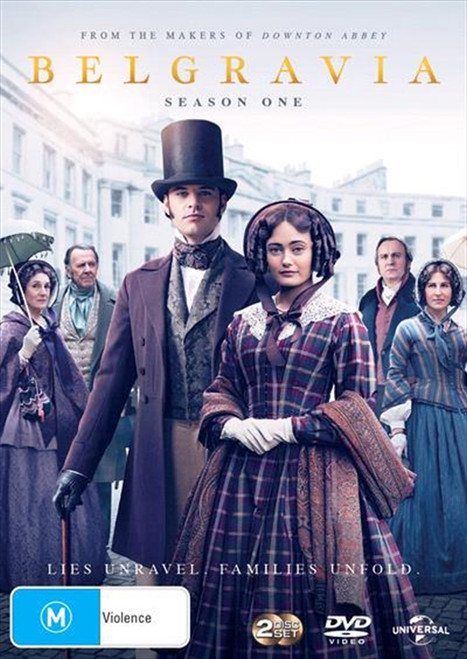 The Belgravia DVD is the complete season of this new 2020 show that follows events when the emerging nouveau riche, including the Trenchard family, rub shoulders with London's established upper classes and when secrets from the past threaten to emerge.

Starring Philip Glenister, Tamsin Greig, Harriet Walter and Paul Ritter, it is a story of secrets and dishonour amongst the upper echelon of London society. The Battle of Waterloo sets in motion a series of events that will have consequences for decades to come. From the makers of Downton Abbey, Julian Fellowes tells the story of a secret that unravels behind the porticoed doors of London's grandest postcode. Set in the 1840s when the upper echelons of society began to rub shoulders with the emerging industrial nouveau riche, but the story begins on the eve of the Battle of Waterloo in 1815.

On the eve of the Battle of Waterloo, two young lovers forge a legacy that will create scandal for generations to come. Years later, when the humble Trenchards (Tamsin Greig and Philip Gleinster) move to Belgravia, they find themselves mixing with the venerated Brockenhursts (Harriet Walter and Tom Wilkinson). The families share a history that threatens inheritances and reputations and there are those who would do anything to ensure secrets remain buried. Pride and loyalty will be tested as forbidden love blossoms amongst the rivalry and lives hang in the balance.