Black on Both Sides: A Racial History of Trans Identity 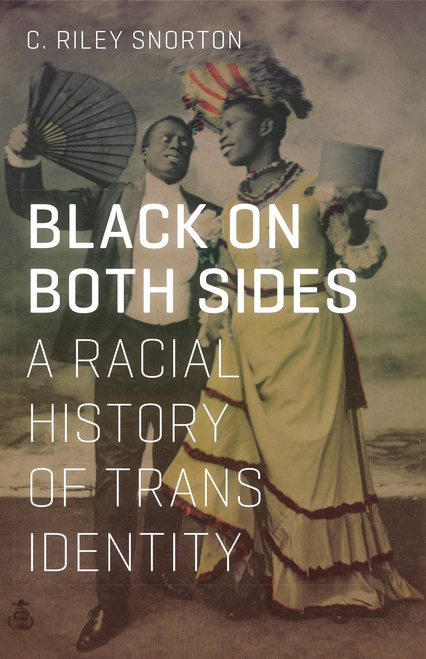 **Honorable Mention: Nickliss Prize in U.S. Women’s and/or Gender History from the Organization of American Historians**

Uncovering the overlapping histories of blackness and trans identity from the nineteenth century to the present day..

The story of Christine Jorgensen, America’s first prominent transsexual, famously narrated trans embodiment in the postwar era. Her celebrity, however, has obscured other mid-century trans narratives—ones lived by African Americans such as Lucy Hicks Anderson and James McHarris. Their erasure from trans history masks the profound ways race has figured prominently in the construction and representation of transgender subjects. In Black on Both Sides, C. Riley Snorton identifies multiple intersections between blackness and transness from the mid-nineteenth century to present-day anti-black and anti-trans legislation and violence.

Drawing on a deep and varied archive of materials—early sexological texts, fugitive slave narratives, Afro-modernist literature, sensationalist journalism, Hollywood films—Snorton attends to how slavery and the production of racialized gender provided the foundations for an understanding of gender as mutable. In tracing the twinned genealogies of blackness and transness, Snorton follows multiple trajectories, from the medical experiments conducted on enslaved black women by J. Marion Sims, the “father of American gynecology,” to the negation of blackness that makes transnormativity possible.

Revealing instances of personal sovereignty among blacks living in the antebellum North that were mapped in terms of “cross dressing” and canonical black literary works that express black men’s access to the “female within,” Black on Both Sides concludes with a reading of the fate of Phillip DeVine, who was murdered alongside Brandon Teena in 1993, a fact omitted from the film Boys Don’t Cry out of narrative convenience. Reconstructing these theoretical and historical trajectories furthers our imaginative capacities to conceive more livable black and trans worlds.

"Black on Both Sides challenges the historical account of trans studies invention by excavating a black trans presence and persona long before modern articulations of such. C. Riley Snorton offers us a way to read the historical record in a fashion that requires the unthought to be the basis of the foundation for our claims of newness, demonstrating that there is no revision of what it means to be human without coming through blackness, past and present."—Rinaldo Walcott, author of Queer Returns: Essays on Multiculturalism, Diaspora, and Black Studies

"C. Riley Snorton's Black on Both Sides is a welcome contribution to black studies with the potential to influence future directions in the burgeoning field of transgender studies. It is rigorous scholarship that manages to be imaginative and timely."—Kara Keeling, author of The Witch’s Flight: The Cinematic, the Black Femme, and the Image of Common Sense

Felix Ever After (Paperback B Format)

Thanks a Lot, Universe

Mouths of Rain: An Anthology of Black Lesbian Thought

The (Other) F Word: A Celebration of the Fat & Fierce