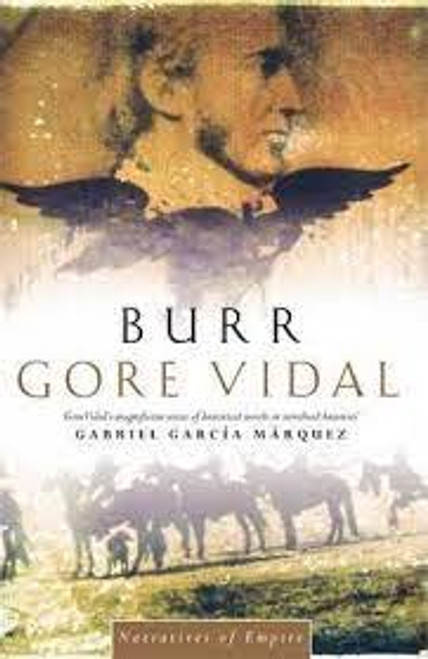 A novel about Aaron Burr, the character now perhaps best known for his part in Lin-Manuel Miranda's Hamilton - the Vice President of the United States who killed Alexander Hamilton in a duel.

In 1804, Colonel Aaron Burr, Vice-President of the United States, shot and killed Alexander Hamilton in a duel. Three years later, on the order of President Thomas Jefferson, he was tried for treason: for plotting to dismember the United States.

Gore Vidal, romping iconoclastically through American history, debunks, in this historical novel of Burr's life, the common and casually held notion of the man as a scoundrel and an adventurer. Instead he appears as one of the 'host of choice spirits' forced to live among coarse, materialistic, hypocritical people, among them Jefferson and Hamilton. Here, the latter appears as a power-hungry 'parvenu' from the West Indies and the former as a semi-literate slave-owning tyrant. American politics, suggests Vidal, had a penchant for the vulgar. Even then.

Veering backwards to the revolution and the early days of the republic, stopping at dinner-parties on the way, and reaching forward to the future, Burr is a novel about treason, both the particular and in general. For what, asks Vidal, really belongs to whom? What properly belongs to the Constitution, to the nation, to the family even, intriguingly, to novelists and historians?

"Fascinating reading ... the story is as many-sided as the American continent itself."- DAILY TELEGRAPH