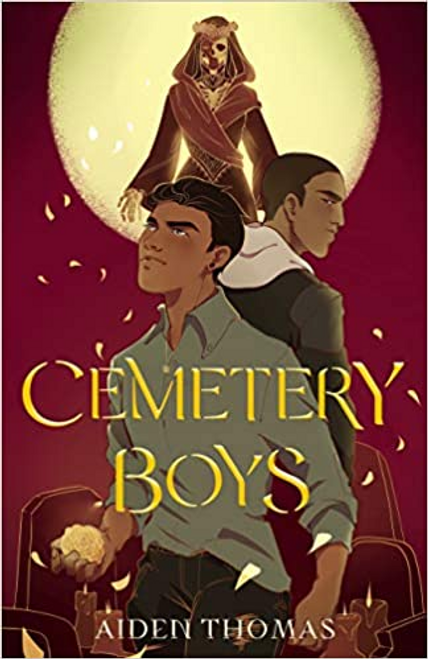 A trans boy determined to prove his gender to his traditional Latinx family summons a ghost who refuses to leave in Aiden Thomas's paranormal YA debut Cemetery Boys.

Yadriel has summoned a ghost, and now he can't get rid of him.

When his traditional Latinx family has problems accepting his true gender, Yadriel becomes determined to prove himself a real brujo. With the help of his cousin and best friend Maritza, he performs the ritual himself, and then sets out to find the ghost of his murdered cousin and set it free.

However, the ghost he summons is actually Julian Diaz, the school's resident bad boy, and Julian is not about to go quietly into death. He's determined to find out what happened and tie off some loose ends before he leaves. Left with no choice, Yadriel agrees to help Julian, so that they can both get what they want. But the longer Yadriel spends with Julian, the less he wants to let him leave.

"This stunning debut novel from Thomas is detailed, heart-rending, and immensely romantic. I was bawling by the end of it, but not from sadness: I just felt so incredibly happy that this queer Latinx adventure will get to be read by other kids. Cemetery Boys is necessary: for trans kids, for queer kids, for those in the Latinx community who need to see themselves on the page. Don’t miss this book." ―Mark Oshiro, author of Anger is a Gift

"Aiden Thomas' debut novel can't help but charm and captivate readers of all ages, though teen readers will invariably identify with and appreciate the high jinks and emotional vulnerability that make each character and scenario deliciously enchanting." ― Booklist, starred review

"This book is magical, tender, loving, and so so so important. I love it with all my heart." ―Mason Deaver, author of I Wish You All The Best