Dominus: A Novel of the Roman Empire 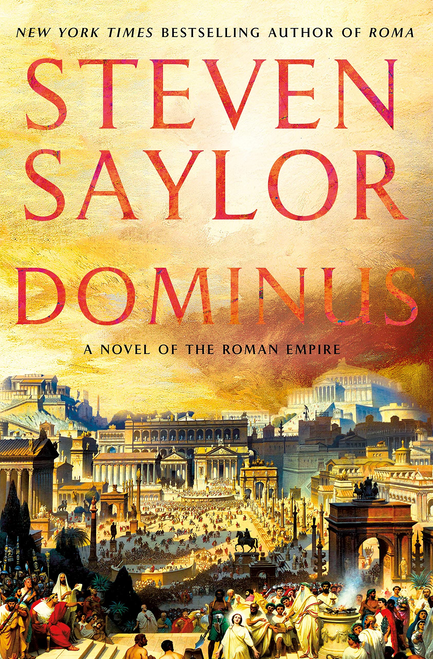 Following his international bestsellers Roma and Empire, Steven Saylor's Dominus continues his saga of the greatest, most storied empire in history from the eternal city at the very center of it all.

A.D. 165: The empire of Rome has reached its pinnacle. Universal peace―the Pax Roma―reigns from Britannia to Egypt, from Gaul to Greece. Marcus Aurelius, as much a philosopher as he is an emperor, oversees a golden age in the city of Rome. The ancient Pinarius family and their workshop of artisans embellish the richest and greatest city on earth with gilded statues and towering marble monuments. Art and reason flourish. But history does not stand still.

The years to come bring wars, plagues, fires, and famines. The best emperors in history are succeeded by some of the worst. Barbarians descend in endless waves, eventually appearing before the gates of Rome itself. The military seizes power and sells the throne to the highest bidder. Chaos engulfs the empire.

Through it all, the Pinarius family endures, thanks in no small part to the protective powers of the fascinum, a talisman older than Rome itself, a mystical heirloom handed down through countless generations.

But an even greater upheaval is yet to come. On the fringes of society, troublesome cultists disseminate dangerous and seditious ideas. They insist that everyone in the world should worship only one god, their god. They call themselves Christians. Some emperors deal with the Christians with toleration, others with bloody persecution. Then one emperor does the unthinkable. He becomes a Christian himself. His name is Constantine, and the revolution he sets in motion will change the world forever.

Spanning 160 years and seven generations, teeming with some of ancient Rome’s most vivid figures, Saylor's epic brings to vivid life some of the most tumultuous and consequential chapters of human history, events which reverberate still.

"The story of Rome’s decline is told in epic, episodic fashion...The pacing is more leisurely at the start, while Rome is still in its prime, but as emperors come and go with increasing speed and bloodshed, and the military and mob rule decide the empire's fate, the pace quickens...Fans of historical sagas will relish." --Booklist

The Guncle - temporarily out of stock