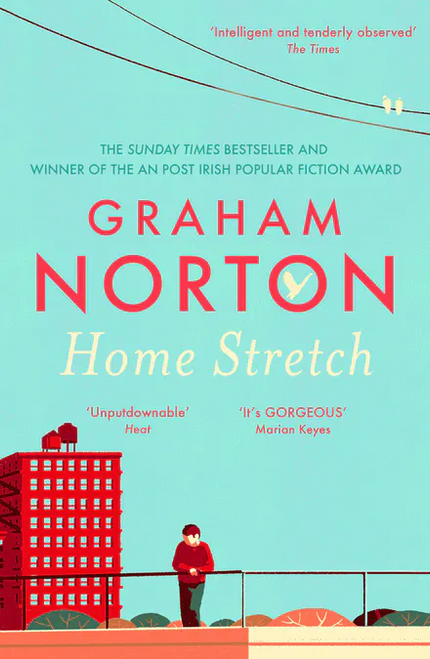 In the compelling new novel, Home Stretch, Graham Norton demonstrates his keen understanding of the power of stigma and secrecy - with quietly devastating results.

Shame and longing can flow through generations, but the secrets of the heart will not be buried for ever.

It is 1987 and a small Irish community is preparing for a wedding. The day before the ceremony a group of young friends, including bride and groom, drive out to the beach. There is an accident. Three survive, but three are killed.

The lives of the families are shattered and the rifts between them are felt throughout the small town. Connor is one of the survivors. But staying among the angry and the mourning is almost as hard as living with the shame of having been the driver. He leaves the only place he knows for another life, taking his secrets with him. Travelling first to Liverpool, then London, he makes a home - of sorts - for himself in New York. The city provides shelter and possibility for the displaced, somewhere Connor can forget his past and forge a new life.

But the secrets, the unspoken longings and regrets that have come to haunt those left behind will not be silenced. And before long, Connor will have to confront his past.

"This is TV personality Graham Norton’s third novel but his first to place a gay man centre stage - and it is a cracker of a story. It’s 1987 in West Cork, Ireland, and a senseless fatal car accident kills three young people, disables one for life, and upends the future of the driver, young Connor. The accident is all the more tragic as two of the passengers were to get married the following day. Instead of a joyous wedding, there are funerals to arrange. The families of those in the car also have their lives upturned, especially Connor’s family who own the local pub. Patronage plummets. In a small Irish village where everyone knows everyone and their business, it seems impossible for life to ever be restored to any sense of normal... unless Connor leaves. With him out of sight, perhaps the families directly affected and the village can heal to some degree. He goes to Liverpool, then London, and eventually ends up in New York. These new cities allow Connor the space to explore his closeted sexuality, but the more he accepts himself, the more impossible it seems to ever return home where homophobia was rife. Even his own parents made anti-gay remarks and with the trauma of the car accident as well, Connor simply fails to ever contact his family. For his parents, it’s as if he died that day as well... The other passenger who walked away from the car accident, Martin, emerges unscathed. He completes his medical studies, returns to the village as the local doctor, and marries Connor’s sister Ellen. The decades pass and it is only 25 years later that some questions begin to fester about that fateful day. Gradually it is revealed that the accepted truths of what occurred are not correct and there is much more to the story than anyone knew... The great strengths of this novel is its page-turning plot, the strong characterisation, and the dead-on portrait of a small Irish village. Norton is especially good at portraying the closed mind attitudes of this period, which makes it all the more remarkable when we see a heartwarming transformation. By the end of the novel, the village is hosting a same-sex wedding, an echo to the wedding that never occurred at the beginning of the novel."

'A real page-turner, the kind of warmth and magical storytelling that puts me in mind of the late, great Maeve Binchy... a writer of real strength and talent.'-LORRAINE KELLY

'Full of heart and humanity and I loved every single page. What a storyteller!'-ELIZABETH DAY

'a thoughtful examination of sexual identity, shame, and the impact of collective grief.'-OBSERVER

'Graham Norton's new novel has me in floods... His gift for characterisation is positively Binchy-esque! Such nuance and warmth! It's GORGEOUS.'-MARIAN KEYES

'I loved HOME STRETCH ... one of those books that stays with you so long after you've finished it' NIGELLA LAWSON 'A subtle portrait of small-town Ireland; an unblinking study of shame & homophobia; a map of cultural shifts between 1980s & now; a kind, wise, perceptive novel by an author rich in these qualities.'-DAVID MITCHELL

'Beautifully written. Fasten your seatbelts, it's going to be a bumpy read. Utterly fantastic.'-LIZ NUGENT

'Graham Norton's examination of small-town Irish lives continues in his deeply moving third novel. He is a magnificent writer.'-JOHN BOYNE

'[Graham Norton is a] king of the page turners... A total triumph.'-ANNE GRIFFIN

'What right has such a successful entertainer to write a novel as good as this?'-SUNDAY EXPRESS