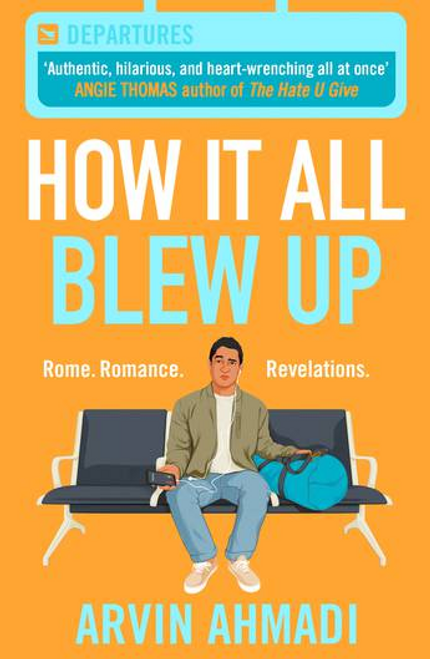 Arvin Ahmadi has written a novel that is authentic, hilarious and heart-wrenching all at once. A unique point of view combined with riveting storytelling, How It All Blew Up will grab you from the first the page and won't let go - Angie Thomas, #1 New York Times bestselling author of THE HATE U GIVE and ON THE COME UP

Eighteen-year-old Amir Azadi always knew that coming out to his Muslim family would be messy, but he wasn't expecting it to end in an airport interrogation room. Now, he's telling his side of the story to the stern-faced officer.

Amir has to explain why he ran away to Rome (boys, bullies, blackmail) and what he was doing there for a month (dates in the Sistine Chapel, friends who helped him accept who he is, and, of course, drama) . . . all while his mum, dad and little sister are being interrogated in the room next door.

A nuanced take on growing up brown, Muslim and gay in today's America, HOW IT ALL BLEW UP is the story of one boy's struggle to come out to his family, and how that painful process exists right alongside his silly, sexy romp through Italy.
Author: Arvin Ahmadi
Paperback Published December 2020 288 pages
Read and Recommended by Hendri:
"This novel begins in an airport interrogation room where eighteen-year-old Amir Azadi and his family must reveal their family secret in front of the security officers. What would have been a dramatic situation, however, turns out to be a heartbreaking experience. This is where Amir proudly comes out as a gay man to his mother, father, and younger sister, embracing Muslim, gay, and migrant identity altogether as his multidimensional identity. This self-acceptance journey is not easy since the beginning. Amir harbours the perception that coming out to his Muslim family would never be easy, especially after his bully at school threatens to send the video of Amir kissing his ex-boyfriend to his parents. Driven by such fear, Amir runs away to Italy, only to accidentally find a group of hot young gay men who help him accept who he is, and indeed, entangles him into drama, sex, and parties. When his family finally finds him in Rome, Amir can no longer escape and must face the reality that his family cannot be easily pigeonholed as homophobic.  Arvin Ahmadi beautifully offers a nuanced take on multiple identities shaping a young gay man's life in America, and how an interrogation room can be subverted from a violent space into a place for reconciliation and self-reinvention."
×