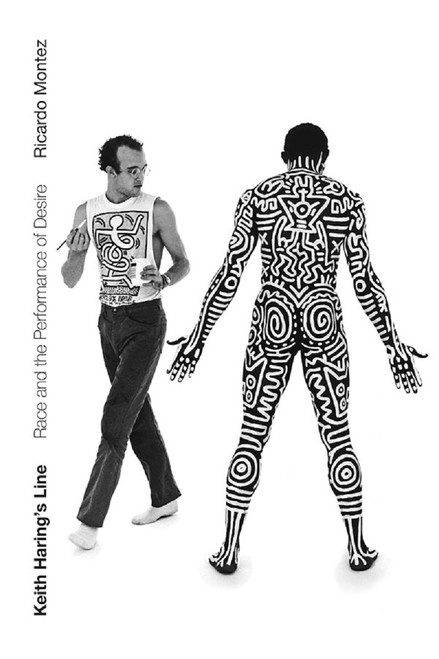 In the thirty years since his death, Keith Haring—a central presence on the New York downtown scene of the 1980s—has remained one of the most popular figures in contemporary American art.

In one of the first book-length treatments of Haring’s artistry, Ricardo Montez traces the drawn and painted line that was at the center of Haring’s artistic practice and with which the artist marked canvases, subway walls, and even human flesh. Keith Haring’s Line unites performance studies, critical race studies, and queer theory in an exploration of cross-racial desire in Haring’s life and art. Examining Haring’s engagements with artists such as dancer and choreographer Bill T. Jones, graffiti artist LA II, and iconic superstar Grace Jones, Montez confronts Haring’s messy relationships to race-making and racial imaginaries, highlighting scenes of complicity in order to trouble both the positive connotations of inter-racial artistic collaboration and the limited framework of appropriation.

“Keith Haring's Line is a brilliant, engaging, and necessary book. Centering the story of Haring's line on the queer people of color with whom Haring collaborated, Ricardo Montez gifts the reader with an intensely productive vocabulary for naming and exploring the relational dynamics that define the practices of a number of artists working across incommensurate forms of difference. Montez's writing does justice to so many neglected figures (like Juan Dubose and graffiti artist LA II) and importantly situates Haring's practice in relationship to performance-centered scenes of the 1970s and 1980s. This is not only the definitive take on Haring, it is the book on Haring's world.” — Jennifer Doyle, author of Hold It Against Me: Difficulty and Emotion in Contemporary Art

“A well-written and carefully elaborated study of Keith Haring and the cultural politics of race and desire that spans beyond Haring. Ricardo Montez's careful reading of different ‘scenes’ of interracial desire allows the reader to get close to the nuances of the power dynamics played out within them. Original and compelling.” — Gavin Butt, author of Between You and Me: Queer Disclosures in the New York Art World, 1948-1963

"Keith Haring’s Line is neither a biography nor a general assessment of Haring’s work as an artist. Rather, it is a queer musing upon the intersections of sex and race in Haring’s work. . . . Montez writes with authority about photography, art, and queer theory, but the passion of this book lies in its interrogation of sex and race." — Dennis Altman, Gay and Lesbian Review

Leonardo Da Vinci: The Renaissance of the World

Circles and Squares: The Lives and Art of the Hampstead Modernists

The End of October