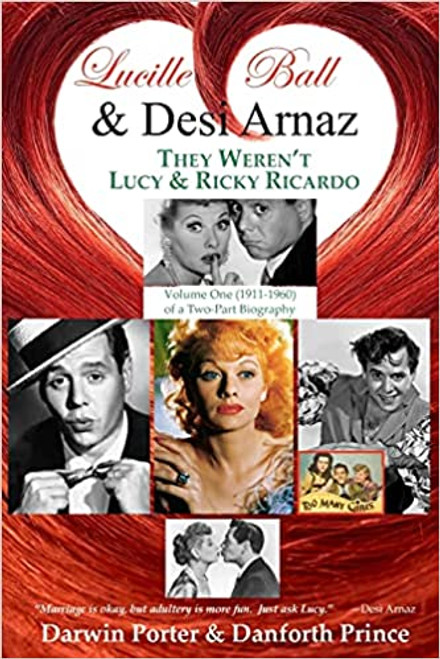 From 1951 through 1956, I Love Lucy was the most-watched show in television. Its launch was as rocky as the marriage of the real-life show-biz pros who crafted it.

After their divorce in 1960, Lucille Ball appraised Desi Arnaz, her former husband: "He's like Jekyll and Hyde. He drinks and gambles, he's awash in broads and booze, and that gay actor, Cesar Romero, is his devoted slave. Love?" she asked. "I was always falling in love with the wrong man. Including Desi."

Arnaz summed up his marriage to Lucille: "We were anything but Lucy and Ricky Ricardo. They had nothing to do with us. We dreamed of success, fame, and fortune. And guess what? It all led to hell."

Their early struggles were epic. As a girl, Lucy at times was literally chained to her backyard in Jamestown, New York. As a teenager, she broke away and earned a reputation as "The Jamestown Hussy," riding around with Johnny DaVita, a local hoodlum.

Later, she broke into show business, hustling "sugar daddies" and stage-door Johnnies who gave her money and gifts. When she was desperate, she worked as a nude model.

In the 1930s, she migrated to Hollywood and made films for RKO.

Desi, however, was born to wealth and privilege in Cuba. At the age of twelve, as an incentive to helping him lose his virginity, he was escorted to a local bordello by his father.

Having lost most of their assets in the Cuban Revolution, his family fled. In Miami, Desi got a job as a janitor cleaning out canary cages. Later, in Manhattan, he accepted whatever gigs he could get. He became the "kept boy" of the gay composer Lorenz Hart, sustaining an affair with superstar Ginger Rogers on the side. That included the task of escorting her into Canada for an abortion. He was eventually hired by bandleader Xavier Cugat to "beat hell out of those Afro-Cuban drums."

After drifting to Hollywood, he spotted Lucy on a sound stage "dressed like a two-dollar whore who had been badly beaten by her pimp."

[That was, indeed, the character she developed for her role in Dance Girl Dance (1940). During its filming, she "more or less politely" resisted the lesbian advances of her director, Dorothy Arzner. Desi succeeded where Arzner failed, marrying Lucy that same year.] Characterized by violent fights and long separations, their stormy marriage staggered along for two traumatic decades.

Desi's obsession with sex became legendary. He seduced every prostitute in Polly Adler's infamous NYC whorehouse. In Hollywood, Lana Turner and Betty Grable came and went from his life, along with countless showgirls and hometown gals attending his on-the-road band shows.

By the early 1950s, the careers of both Lucy and Desi had run out of gas. TV executives objected to his Cuban accent. But I Love Lucy was launched nevertheless and shot up in the ratings, morphing into the most successful sitcom in TV history.

"With gold arriving in wheelbarrows" (Desi's words), Lucy and Desi bought RKO Studios and launched Desilu Productions. It became the largest motion picture and television studio in the world.

This first-of-a-kind biography of TV's wackiest and most eccentric couple is generously stuffed with ironic facts and blunt assessments from their frenemies. It radically changes the premises of the American Dream that helped fuel its success.

The Monocle Book of Homes