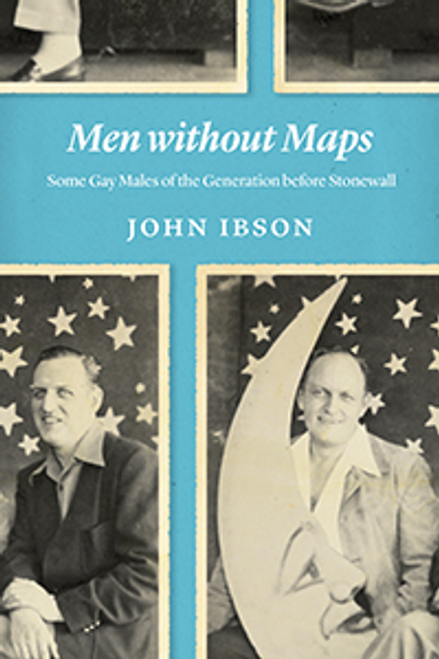 In Men without Maps, John Ibson uncovers the experiences of men after World War II who had same-sex desires but few affirmative models of how to build identities and relationships.

Though heterosexual men had plenty of cultural maps—provided by nearly every engine of social and popular culture—gay men mostly lacked such guides in the years before parades, organizations, and publications for queer persons. Surveying the years from shortly before the war up to the gay rights movement of the late 1960s and early ’70s, Ibson considers male couples, who balanced domestic contentment with exterior repression, as well as single men, whose solitary lives illuminate unexplored aspects of the queer experience. Men without Maps shows how, in spite of the obstacles they faced, midcentury gay men found ways to assemble their lives and senses of self at a time of limited acceptance.

“Ibson has a tradition of finding imaginative ways to understand the history of gender and sexuality, both as identities and as forces guiding lives and behavior. In Men without Maps, he offers a powerful and sympathetic portrayal of the creativity and courageousness of male-desiring American men in the middle of the twentieth century. Ibson’s engaging prose and creative, original, and inspiring analysis make this book an interdisciplinary gem for anyone interested in the history of gay identity and culture. Men without Maps is impossible to read without simultaneously relishing.”-Tristan Bridges, University of California, Santa Barbara
“Men without Maps is a lovely book. Like Ibson’s earlier work, it is both scholarly and accessible. He convincingly argues that gay men from World War II up to Stonewall had no maps for manhood, in contrast with the ubiquitous maps that served as ‘basic training’ for heterosexual manhood. The book’s clear, deeply moving, and well-drawn prose will interest scholars of LGBTQ studies, masculinities, and sex and gender history.”-Michael Messner, University of Southern California
"Well researched and thoroughly documented with extensive notes, this slim volume belies its brevity, amply illustrated with photographs from numerous collections that leave the reader wanting more."-Choice
×

Indecent Advances : A Hidden History of True Crime and Prejudice Before Stonewall

Indecent Advances : A Hidden History of True Crime and Prejudice Before Stonewall (Paperback)