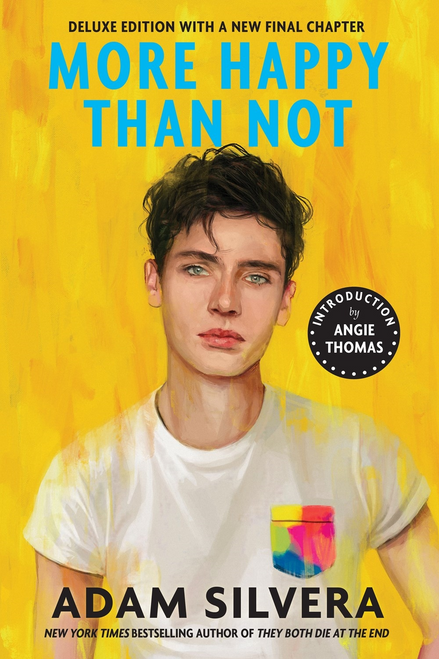 A special Deluxe Edition of Adam Silvera’s groundbreaking debut featuring an introduction by Angie Thomas, New York Times bestselling author of The Hate U Give, a new final chapter, and an afterword about where it all began.

In the months following his father’s suicide, sixteen-year-old Aaron Soto can’t seem to find happiness again, despite the support of his girlfriend, Genevieve, and his overworked mom. Grief and the smile-shaped scar on his wrist won’t let him forget the pain. But when Aaron meets Thomas, a new kid in the neighborhood, something starts to shift inside him. Aaron can’t deny his unexpected feelings for Thomas despite the tensions their friendship has created with Genevieve and his tight-knit crew. Since Aaron can’t stay away from Thomas or turn off his newfound happiness, he considers taking drastic actions. The Leteo Institute’s revolutionary memory-altering procedure will straighten him out, even if it means forgetting who he truly is.

Why does happiness have to be so hard?

"A beautiful debut novel [that] manages a delicate knitting of class politics through an ambitious narrative about sexual identity and connection that considers the heavy weight and constructive value of traumatic memory . . . Aaron's Bronx universe [is captured] with a precision that feels at once dreamy and casually reportorial . . . Mandatory reading."—The New York Times Book Review

“Silvera is a master of creating terrifying near futures that feature technology that's both intriguing and troubling.”—Shondaland

The Boy from the Mish - signed by the author