More Than Two: A Practical Guide to Ethical Polyamory 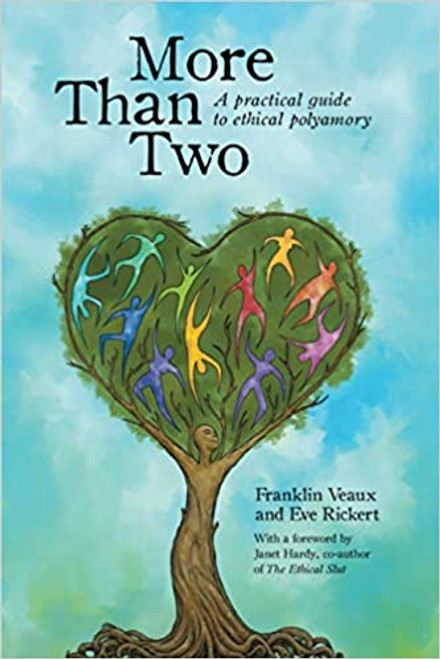 Can you love more than one person? Have multiple romantic partners, without jealousy or cheating? Absolutely! Polyamorous people have been paving the way, through trial and painful error. Now the new book More Than Two can help you find your own way. With completely new material and a fresh approach, Franklin Veaux and Eve Rickert wrote More Than Two to expand on and update the themes and ideas in the wildly popular polyamory website morethantwo.com.

From Ancient Greece through the many dynasties of China to current practices of non-monogamy, people have openly engaged in multiple intimate relationships. Not until the late 20th century, however, was a word coined that encapsulated the practice, as well as its philosophies, edicts and ethics: polyamory (poly = many + amore = love).

For Franklin Veaux, who has been polyamorous for his entire adult life, the emerging framework and subsequent vocabulary for his lifestyle was a light in the dark. Candidly sharing his experiences and thoughts online catapulted his website morethantwo.com, among the first dedicated to the poly lifestyle, to one of the top-ranking on the subject.

In recent years, as more people have discovered polyamory as a legitimate and desirable option for how they conduct their relationships, Franklin and one of his partners, Eve Rickert, saw that there was a growing need for a comprehensive guide to the lifestyle. More Than Two is that guide.

This wide-ranging resource explores the often-complex world of living polyamorously: the nuances (no, this isn't swinging), the relationship options (do you suit a V, an N, an open network?), the myths (don't count on wild orgies and endless sex but don't rule them out either!) and the expectations (communication, transparency and trust are paramount). More Than Two is entirely without judgment and peppered with a good dose of humor. In it the authors share not only their hard-won philosophies about polyamory, but also their hurts and embarrassments. Living poly is not always an easy road, and they hope that by reading this book, you'll avoid some of the mistakes they've made along the way.

Challenging the notion of what society considers a healthy and successful relationship, they offer up personal stories from their own lives as well as of those in the wider poly world, emphasizing that this lifestyle choice isn't for the noncommittal. Polyamory is all about the relationships and the individuals participating. Charting a Relationship Bill of Rights, the authors underscore the importance of engaging in ethical polyamory and guide readers through the thorny issues of jealousy and insecurity with the aim of encouraging readers to work consistently and conscientiously on both their relationships and themselves.

And no, they're not trying to convert you: they know that polyamory isn't for everyone. Veaux and Rickert simply provide those who might be embarking on this lifestyle or those who have always known they are poly with a set of tools and many questions to help them make informed decisions and set them on a path to enjoying multiple happy, strong, enriching relationships.

More Than Two is the book the polyamory community has been waiting for. And who knows? It may just be the book you didn't even know you were waiting for.

“Franklin and Eve's new groundbreaking book is a must-read deep dive into the psychology, morality, and practicalities of non-monogamy done well. Buy two copies - one for yourself and one for that friend who is going to insist on borrowing it.” — Pepper Mint, sex educator and polyamory activist

“This book is going to be an Event. It will immediately rank right at the top of the 36 nonfiction books about polyamory published in the last 30 years.” —Polyamory in the News

The Storm: One Voice from the AIDS Generation