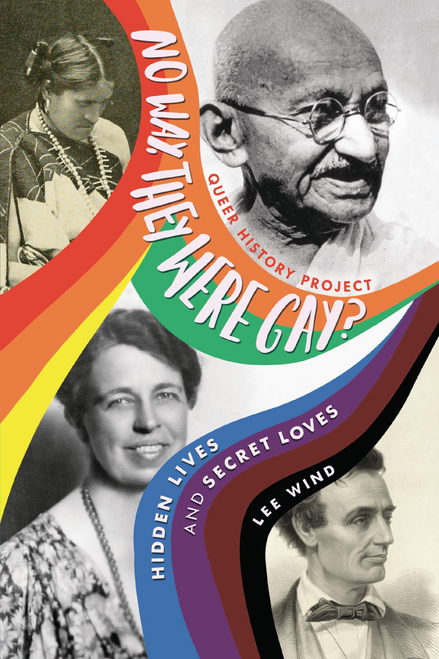 But that's not necessarily true. History was crafted by the people who recorded it. And sometimes, those historians were biased against, didn't see, or couldn't even imagine anyone different from themselves.

That means that history has often left out the stories of LGBTQIA+ people: men who loved men, women who loved women, people who loved without regard to gender, and people who lived outside gender boundaries. Historians have even censored the lives and loves of some of the world's most famous people, from William Shakespeare and Pharaoh Hatshepsut to Cary Grant and Eleanor Roosevelt.

"What's that you say? Abraham Lincoln was gay? No way! Uh, way! declares Wind, asserting Lincoln was, indeed, gay, as were 11 others he profiles: 3 men, 4 women, and 4 individuals who lived outside gender boundaries. Some of them are well-known―Shakespeare, Eleanor Roosevelt―others, not so: for example, M'E Mpho Nthunya and We'wha. How does Wind know all of them were gay when none of them is living? That can be difficult, since sometimes homophobic history has, Wind points out, erased evidence of some people's sexual identity. Happily, to correct that, he has searched out primary-source materials―letters in the cases of Lincoln, Gandhi, and Roosevelt; autobiographies (Catalina de Erauso and Sarah Churchill); anthropological field notes (We'wha)―and a clutch of secondary sources, usually books by those who weren't present, like, Wind acknowledges, this one. Nevertheless, his book is solidly written, well-documented and organized, and illustrated with period photos and portraits. On the whole, it's a modest, well-intentioned contribution to gay history. It's also going to inflame passions, so be prepared for controversy."―Booklist

Little and Often: A Memoir

A Curious Friendship : The Story of a Bluestocking and a Bright Young Thing

Sorting Sexualities: Expertise and The Politics of Legal Classification