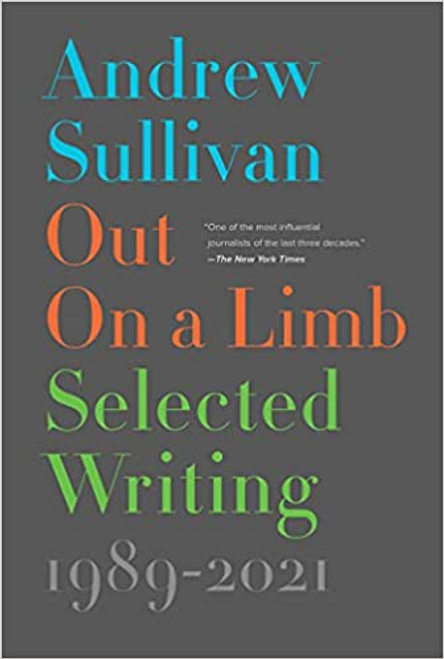 Andrew Sullivan—youngest ever editor of The New Republic, founding editor of The Daily Dish, hailed as “one of the most influential journalists of the last three decades” by The New York Times—presents a collection of his most iconic and powerful essays of social and political commentary from The New Republic, The Atlantic, The New York Times Magazine, New York magazine, and more.

Over the course of his career, Andrew Sullivan has never shied away from staking out bold positions on social and political issues. A fiercely independent conservative, in 1989 he wrote the first national cover story in favor of marriage equality, and then an essay, “The Politics of Homosexuality,” in The New Republic in 1993, an article called the most consequential of the decade in the gay rights movement. A pioneer of online journalism, he started blogging in 2000 and helped define the new medium with his blog, The Daily Dish. In 2007, he was one of the first political writers to champion the presidential campaign of Barack Obama, and his cover story for The Atlantic, “Why Obama Matters,” was seen as a milestone in that campaign’s messaging. In the past five years, he has proved a vocal foe both of Donald Trump and of wokeness on the left. Loved and loathed by both left and right, Sullivan is in a tribe of one.

Bold, timely, and thought-provoking, this collection of Sullivan’s greatest arguments on culture, politics, religion, and philosophy demonstrates why he continues to be ranked among the most intriguing and salient figures in US media.

“[These] essays don’t just communicate his thoughts, they communicate his heart. . . . Even his most passionate arguments are thoughtfully delivered, deeply rooted in his philosophy and faith. . . . When I reached the end of his book, I felt a sense of gratitude. . . . For 32 years a thoughtful man has demonstrated the courage of his convictions and challenged his readers time and again. . . . Read Out on a Limb for the snapshots of recent history. Read it to better understand the many journeys of one of America’s most important public intellectuals. But most of all read this book to see what it looks like when a thoughtful man tries his best to tell the truth and let the chips fall where they may.” —David French, New York Times

“A thrilling intellectual romp through the last 30 years of political and cultural debate . . . [Sullivan] is a writer in the tradition of Samuel Johnson, bringing all available faculties—intellectual, emotional, moral, and spiritual—to bear in his work.” —American Conservative

“[Out on a Limb] gathers 60 pieces from the past three decades that serve as both a chronicle of [Sullivan’s] life and a record of significant transformations in American culture. . . . Trenchant observations from an influential journalist.” —Kirkus Reviews

Fortune Favors the Dead: A Novel (A Pentecost and Parker Mystery)

Harlots, Whores & Hackabouts: A History of Sex for Sale

Vanderbilt: The Rise and Fall of an American Dynasty Hardcover

It Ends With Us