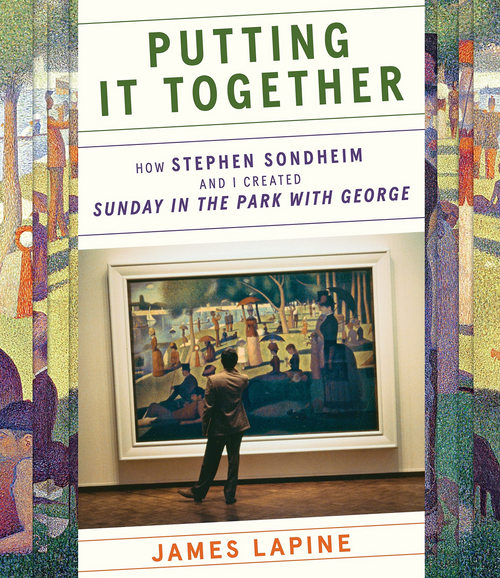 Putting It Together chronicles the two-year odyssey of creating the iconic Broadway musical Sunday in the Park with George. In 1982, James Lapine, at the beginning of his career as a playwright and director, met Stephen Sondheim, nineteen years his senior and already a legendary Broadway composer and lyricist. Shortly thereafter, the two decided to write a musical inspired by Georges Seurat’s nineteenth-century painting A Sunday Afternoon on the Island of La Grande Jatte.

Through conversations between Lapine and Sondheim, as well as most of the production team, and with a treasure trove of personal photographs, sketches, script notes, and sheet music, the two Broadway icons lift the curtain on their beloved musical. Putting It Together is a deeply personal remembrance of their collaboration and friend - ship and the highs and lows of that journey, one that resulted in the beloved Pulitzer Prize–winning classic.

"Putting It Together is the richest backstage memoir I know that concentrates on the work itself. If you want to learn what it’s like to put on a professional show, Mr. Lapine’s book tells pretty much everything, organized by who does what . . . Best of all are the conversations in which Mr. Lapine and Mr. Sondheim admit you to their workshop, sharing memories that illuminate their creative process like a flash of lightning.” ―Terry Teachout, The Wall Street Journal

"Just as Lapine and Sondheim's musical masterpiece Sunday In The Park With George chronicles the sacrifice and struggle in the art of making art, so too does Putting It Together capture the painstaking, bit-by-bit, piece-by-piece energy of creating a new musical. Most astonishing to me are the depth and frankness of Lapine's interviews with his many collaborators: from his tentative first steps writing with Sondheim to wary producers and personality clashes with actors, Lapine lets everyone tell their side of the story, the entire journey to the stage on the page. It's the most thorough and engaging chronicle of a burgeoning life in the theater since Moss Hart's Act One. I didn't read this book: I inhaled it. It's quite a hat." ―LIN-MANUEL MIRANDA

We'll Have Manhattan: The Early Work of Rodgers & Hart

Break an Egg!: The Broadway Cookbook

The Deviant's War: The Homosexual vs. the United States of America