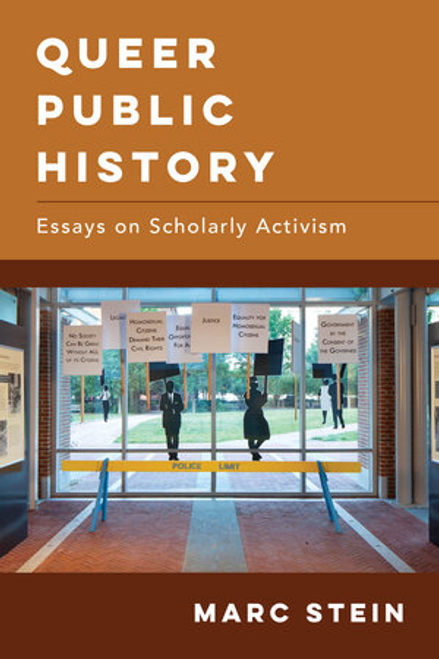 Over the course of the last half century, queer history has developed as a collaborative project involving academic researchers, community scholars, and the public.

Initially rejected by most colleges and universities, queer history was sustained for many years by community-based contributors and audiences. Academic activism eventually made a place for queer history within higher education, which in turn helped queer historians become more influential in politics, law, and society. Through a collection of essays written over three decades by award-winning historian Marc Stein, Queer Public History charts the evolution of queer historical interventions in the academic sphere and explores the development of publicly oriented queer historical scholarship. From the AIDS crisis of the 1980s and the rise of queer activism in the 1990s to debates about queer immigration, same-sex marriage, and the politics of gay pride in the early twenty-first century, Stein introduces readers to key themes in queer public history. A manifesto for renewed partnerships between academic and community-based historians, strengthened linkages between queer public history and LGBT scholarly activism, and increased public support for historical research on gender and sexuality, this anthology reconsiders and reimagines the past, present, and future of queer public history.

"Marc Stein's Queer Public History is an invaluable work that moves the discussion, meaning, and importance of queer lives and actions out of the academy and into the public world. Stein's work here is a vivid, deeply illuminating mixture of research, cogent analysis, reportage, observation, and community interactions. It is a shining light for everyone concerned about the future of queer history."—Michael Bronski, author of A Queer History of the United States

"In this reflective collection of essays, queer historian Marc Stein intimately contextualizes his commitment to making academic work relevant to the public. Best known as a historian of constitutional law, Stein's work here on the Supreme Court's betrayal of LGBT immigrants, on the closeting of Justice Abe Fortas, and on pre-Stonewall rebellions is surprising and gripping. A representative of the first generation of university professors to be out in their work from the start of their careers, Stein honors his mentors and provides a front seat social history of the experiences of the early wave of queer academics, their contradictions and struggles. Personal and vulnerable."—Sarah Schulman, author of Let the Record Show: A Political History of ACT UP New York, 1987–1993

"These brilliant, brave essays present original, quality queer public history and teach how to do that. They're the work of a historian long dedicated to reaching a wide, general audience and maintaining the highest scholarly standards."—Jonathan Ned Katz, Founder, Director, OutHistory.org

Abracadabra: I've Said it Before and I'll Say it Again... signed by the author

Dear Queer Self: An Experiment in Memoir

The History of Sexuality Vol. 4: Confessions of the Flesh (Paperback)

Bitch: A Revolutionary Guide to Sex, Evolution and the Female Animal

Drag: Combing Through the Big Wigs of Show Business

Fine: A Comic About Gender