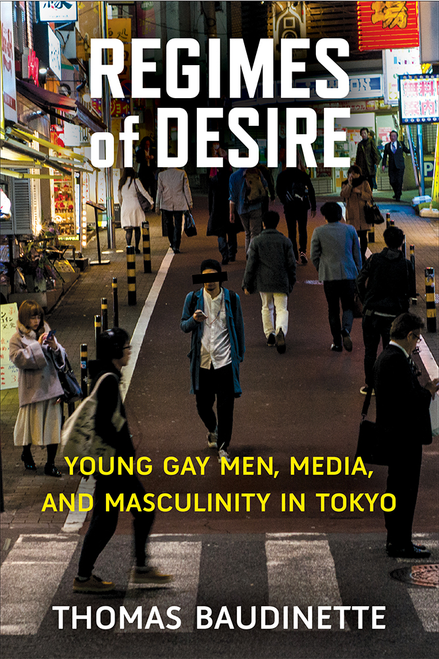 Shinjuku Ni-chōme is a nightlife district in central Tokyo filled with bars and clubs targeting the city’s gay male community. Typically understood as a “safe space” where same-sex attracted men and women from across Japan’s largest city can gather to find support from a relentlessly heteronormative society, Regimes of Desire reveals that the neighborhood may not be as welcoming as previously depicted in prior literature. Through fieldwork observation and interviews with young men who regularly frequent the neighborhood’s many bars, the book reveals that the district is instead a space where only certain performances of gay identity are considered desirable. In fact, the district is highly stratified, with Shinjuku Ni-chōme’s bar culture privileging “hard” masculine identities as the only legitimate expression of gay desire and thus excluding all those men who supposedly “fail” to live up to these hegemonic gendered ideals.

Through careful analysis of media such as pornographic videos, manga comics, lifestyle magazines, and online dating services, this book argues that the commercial imperatives of the Japanese gay media landscape and the bar culture of Shinjuku Ni-chōme act together to limit the agency of young gay men so as to better exploit them economically. Exploring the direct impacts of media consumption on the lives of four key informants who frequent the district’s gay bars in search of community, fun, and romance, Regimes of Desire reveals the complexity of Tokyo’s most popular “gay town” and intervenes in debates over the changing nature of masculinity in contemporary Japan.

“Written in an exceptionally lucid and accessible style, this excellent innovative study assembles a set of case studies of various modalities of gay print, visual and digital media in contemporary Japan to convincingly argue that, despite a recent diversification in some cultural patterns of heterosexual masculinity in Japanese society, the country’s highly mediatised gay culture has come to be dominated by a heteronormative regime of desire that fetishises one particular model of heterosexual masculinity.”—Peter Jackson, Emeritus Professor of Thai History and Cultural Studies, Australian National University

“This research is innovative, thoughtful and inspirational. Regimes of Desire makes an original contribution to the study of queer identity in Japan."—Christopher Pullen, Associate Professor of Media and Inclusivity, Bournemouth University

More Escapism: Hotels, Resorts and Gardens around the World by Bill Bensley