Sexuality: The 1964 Clermont-Ferrand and 1969 Vincennes Lectures 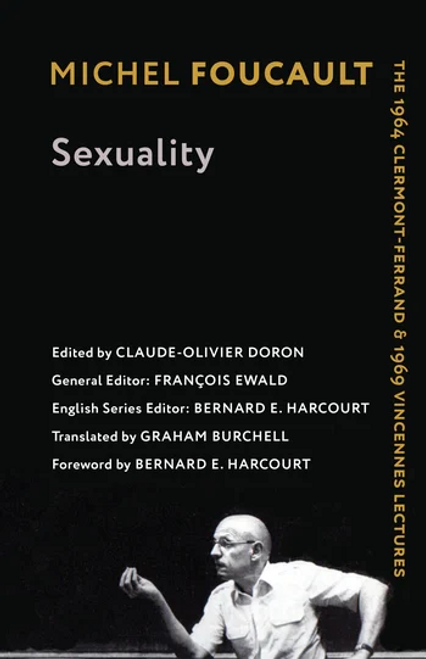 Michel Foucault’s The History of Sexuality—the first volume of which was published in 1976—exerts a vast influence across the humanities and social sciences. However, Foucault’s interest in the history of sexuality began as early as the 1960s, when he taught two courses on the subject. These lectures offer crucial insight into the development of Foucault’s thought yet have remained unpublished until recently.

This book presents Foucault’s lectures on sexuality for the first time in English. In the first series, held at the University of Clermont-Ferrand in 1964, Foucault asks how sexuality comes to be constituted as a scientific body of knowledge within Western culture and why it derived from the analysis of “perversions”—morbidity, homosexuality, fetishism. The subsequent course, held at the experimental university at Vincennes in 1969, shows how Foucault’s theories were reoriented by the events of May 1968; he refocuses on the regulatory nature of the discourse of sexuality and how it serves economic, social, and political ends. Examining creators of political and literary utopias in the nineteenth and twentieth centuries, from Sade to Fourier to Marcuse, who attempted to integrate “natural” sexualities, including transgressive forms, into social and economic life, Foucault elaborates a double critique of the naturalization and the liberation of sexuality. Together, the lectures span a range of interests, from abnormality to heterotopias to ideology, and they offer an unprecedented glimpse into the evolution of Foucault’s transformative thinking on sexuality.

"What comes to my mind when traversing these extraordinary lectures is a variant of the famous motto: 'same is another.' Foucault claimed that he was writing texts to depart from himself. And he succeeded. But in doing so he delved deeper and deeper into his own truth. And into ours."-Étienne Balibar, author of Violence and Civility: On the Limits of Political Philosophy

"This volume of Foucault’s early lectures on sexuality offers readers a chance to follow the ebbs and flows of theoretical thought as ideas take shape under very specific historical conditions. With a brilliant introduction by Bernard Harcourt guiding the way, the lectures gathered here provide deep insight into the braided structures of power, knowledge and desire that continue to regulate bodies. At the same time, this deep archive provides opportunities for linking to other moments of rebellion, opposition and, even, abolition." -Jack Halberstam, author of Wild Things: The Disorder of Desire and Trans*: A Quick and Quirky Guide to Gender Variation

Bi the Way: The Bisexual Guide to Life

The Fickle FInger of Fate