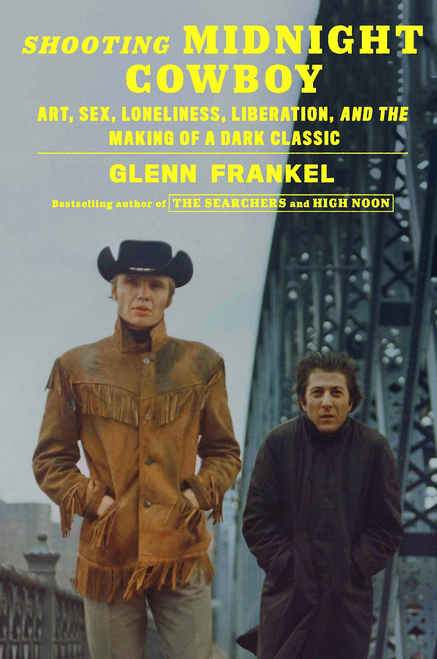 The Pulitzer Prize–winning journalist and New York Times–bestselling author of the behind-the-scenes explorations of the classic American Westerns High Noon and The Searchers now reveals the history of the controversial 1969 Oscar-winning film that signaled a dramatic shift in American popular culture.

Director John Schlesinger’s Darling was nominated for five Academy Awards, and introduced the world to the transcendently talented Julie Christie. Suddenly the toast of Hollywood, Schlesinger used his newfound clout to film an expensive, Panavision adaptation of Far from the Madding Crowd. Expectations were huge, making the movie’s complete critical and commercial failure even more devastating, and Schlesinger suddenly found himself persona non grata in the Hollywood circles he had hoped to conquer.

Given his recent travails, Schlesinger’s next project seemed doubly daring, bordering on foolish. James Leo Herlihy’s novel Midnight Cowboy, about a Texas hustler trying to survive on the mean streets of 1960’s New York, was dark and transgressive. Perhaps something about the book’s unsparing portrait of cultural alienation resonated with him. His decision to film it began one of the unlikelier convergences in cinematic history, centered around a city that seemed, at first glance, as unwelcoming as Herlihy’s novel itself.

Glenn Frankel’s Shooting Midnight Cowboy tells the story of a modern classic that, by all accounts, should never have become one in the first place. The film’s boundary-pushing subject matter―homosexuality, prostitution, sexual assault―earned it an X rating when it first appeared in cinemas in 1969. For Midnight Cowboy, Schlesinger―who had never made a film in the United States―enlisted Jerome Hellman, a producer coming off his own recent flop and smarting from a failed marriage, and Waldo Salt, a formerly blacklisted screenwriter with a tortured past. The decision to shoot on location in New York, at a time when the city was approaching its gritty nadir, backfired when a sanitation strike filled Manhattan with garbage fires and fears of dysentery.

Much more than a history of Schlesinger’s film, Shooting Midnight Cowboy is an arresting glimpse into the world from which it emerged: a troubled city that nurtured the talents and ambitions of the pioneering Polish cinematographer Adam Holender and legendary casting director Marion Dougherty, who discovered both Dustin Hoffman and Jon Voight and supported them for the roles of “Ratso” Rizzo and Joe Buck―leading to one of the most intensely moving joint performances ever to appear on screen. We follow Herlihy himself as he moves from the experimental confines of Black Mountain College to the theatres of Broadway, influenced by close relationships with Tennessee Williams and Anaïs Nin, and yet unable to find lasting literary success.

By turns madcap and serious, and enriched by interviews with Hoffman, Voight, and others, Shooting Midnight Cowboy: Art, Sex, Loneliness, Liberation, and the Making of a Dark Classic is not only the definitive account of the film that unleashed a new wave of innovation in American cinema, but also the story of a country―and an industry―beginning to break free from decades of cultural and sexual repression.

“A vivid chronicle . . . Frankel offers behind-the-scenes anecdotes . . . [and] also renders the social upheaval of the era―the Stonewall riots, antiwar protests, racial unrest―and the window between the collapse of old Hollywood’s heavy censorship and the rise of the profit-oriented blockbusters when Midnight Cowboy was made. This enthralling account of a boundary-breaking film is catnip for film buffs.” ―Publishers Weekly (starred review)

"Tackling questions of censorship and the MPAA ratings, bravura performances by Jon Voight and Dustin Hoffman, the costumes, the soundtrack, and the film's coronation at the 1970 Academy Awards, Frankel expertly brings it all together . . . An in-depth, exquisite biography of a legendary film, and a must-read for cinephiles." ―Peter Thornell, Library Journal (starred review)

“From the author of the splendid The Searchers (2013) comes another making-of book that transcends the genre. This is no mere story of the production of [Midnight Cowboy]; instead, it offers in-depth portraits of the man who created the characters of Joe Buck and Ratso Rizzo . . . and the men who gave them cinematic life . . . Frankel, who won a Pulitzer in 1989 for international reporting, brings a reporter’s eye to the story.” ―David Pitt, Booklist (starred review)

A High Five for Glenn Burke