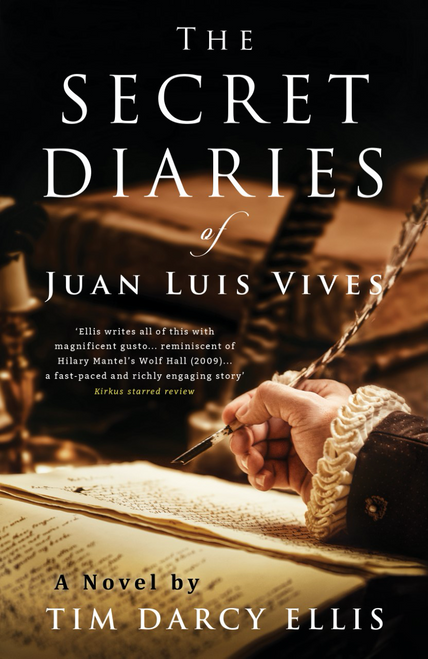 'Ellis writes all of this with marvellous gusto that's more reminiscent of Hilary Mantel's Wolf Hall (2009) than of a more traditional Tudor novel ... A fast paced and richly engaging story about an intriguing historical figure.' Kirkus Reviews (starred review)

It is 1522, The Spanish Netherlands, Juan Luis Vives, a renowned academic, has fled Spain to avoid the fires of the Inquisition, yet even here he is not safe. When England's Sir Thomas More offers him the role of tutor to Mary, daughter of Catherine of Aragon and Henry VIII, he eagerly accepts.While publicly navigating life as a 'New Christian,' Vives is quickly drawn into the secretive and dangerous world of London's Jewish community. With a foot in each world, he is torn between the love of two women. Inside the Tudor court, the king and queen separately seek Vives's assistance to support their opposed demands. He must betray one to help the other, knowing his decision could cost him his life. Whom will he choose? Will his wily skills allow him to manipulate them both? Not only his survival but that of his family and his entire people hang in the balance.'

One of Sydney's best-known LGBTQI Physios, Tim Ellis turns his hand to historical fiction in his well-received debut novel, The Secret Diaries of Juan Luis Vives. Tim's book, set in the Tudor era (1520s), is steeped in court drama, forbidden love and the tension of dark history. Described as 'a swirling, beautifully penned novel' it has been compared to Hilary Mantel's Wolf Hall - Kirkus Starred Review - and has already hit No.1 in Kindle downloads in the category of Spanish Literature.

Known to many of us as a Darlinghurst Physio - for thirteen years - Tim now has a holistic Physio and Wellness centre practice in Mascot. His contribution to the community has involved regular collaborations with Positive Life NSW, Mature Age Gays (MAG), and various gay sports clubs. He is one of the few Physios that still bulk-bill PLWHA and other chronic health conditions on Medicare plans.

Tim’s protagonist, Juan Luis Vives (1492-1540) was a real-life humanist and larger than life character who self-exiled from Spain under the pressure of the Inquisition. Known as 'the godfather of psychoanalysis,' for his work on mood, the dialectic and PTSD, he advocated treatment and compassion for the mentally ill. Vives supported state-care for the poor and sick, (a form of early national health service) and advocated for a ‘league of nations' with humanist ethics. He despised politico-religious persecutions and risked his life standing up against it.