The World Only Spins Forward: The Ascent of Angels in America 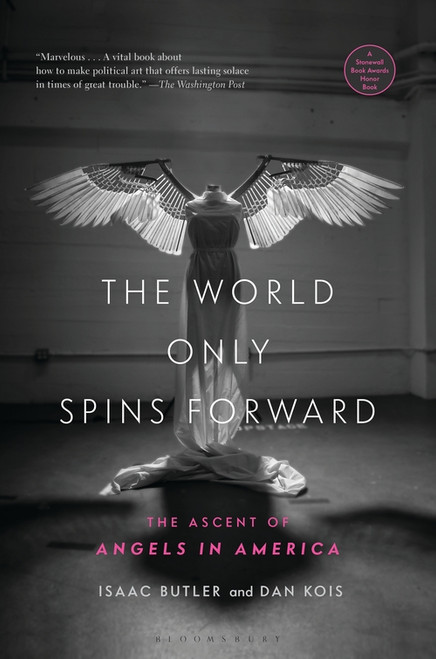 When Tony Kushner's Angels in America hit Broadway in 1993, it won the Pulitzer Prize, swept the Tonys, launched a score of major careers, and changed the way gay lives were represented in popular culture. Mike Nichols's 2003 HBO adaptation starring Meryl Streep, Al Pacino, and Mary-Louise Parker was itself a tour de force, winning Golden Globes and eleven Emmys, and introducing the play to an even wider public. This generation-defining classic continues to shock, move, and inspire viewers worldwide.

Now, on the 25th anniversary of that Broadway premiere, Isaac Butler and Dan Kois offer the definitive account of Angels in America in the most fitting way possible: through oral history, the vibrant conversation and debate of actors (including Streep, Parker, Nathan Lane, and Jeffrey Wright), directors, producers, crew, and Kushner himself. Their intimate storytelling reveals the on- and offstage turmoil of the play's birth--a hard-won miracle beset by artistic roadblocks, technical disasters, and disputes both legal and creative. And historians and critics help to situate the play in the arc of American culture, from the staunch activism of the AIDS crisis through civil rights triumphs to our current era, whose politics are a dark echo of the Reagan '80s.

Expanded from a popular Slate cover story and built from nearly 250 interviews, The World Only Spins Forward is both a rollicking theater saga and an uplifting testament to one of the great works of American art of the past century, from its gritty San Francisco premiere to its starry, much-anticipated Broadway revival in 2018.

“[An] epic oral history. . .Hundreds of interviewees--from playright Tony Kushner to Meryl Streep, who starred in the HBO adaption--lend their insight into both the themes of the play as well as the creative acts required to bring it so stunningly to life.” –  Maris Kreizman, The Cut, "Best Gifts for Book Lovers"

“A full-bodied portrait of Angels and the many people who nurtured it . . . A vivid, intelligently organized oral history . . . More than just the masterful story of one brilliant play, The World Only Moves Forward demonstrates the essentially collaborative nature of theater as an art form.” –  Wendy Smith, Washington Post

“The definitive account of a definitive work of American drama.” –  Entertainment Weekly, "Books to Read, February 2018"

“A fascinating, backstage tour . . . The point is not just to show how this play found its voice, but also to place it in context . . . Theater magic. You've got to love it. And Dan Kois and Isaac Butler have captured a lot of it in The World Only Spins Forward.” –  Bob Mondello, NPR “Best Books of the Year”

“Like Angels in America itself, this oral history of Tony Kushner's two-part, seven-hour theatrical masterwork contains multitudes . . . capturing the ongoing reverberance and currency of Angels. It also conveys, on a granular level, the determination, heartbreak and competitive fire that go into making great theater . . . The World Only Spins Forward both celebrates and illuminates a great work.” –  San Francisco Chronicle

“Marvelous . . . a vital book about how to make political art that offers lasting solace in times of great trouble, and wisdom to audiences in the years that follow.” –  Washington Post