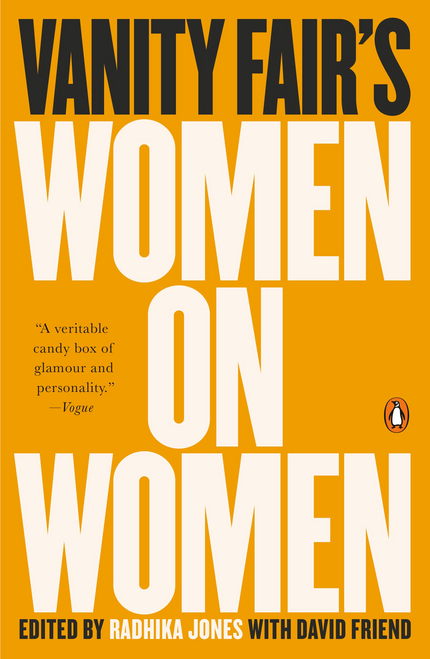 Looking back at the last thirty five years of Vanity Fair feature stories on women, by women, with an introduction by the magazine’s editor in chief, Radhika Jones

Gail Sheehy on Hillary Clinton. Ingrid Sischy on Nicole Kidman. Jacqueline Woodson on Lena Waithe. Leslie Bennetts on Michelle Obama. And two Maureens (Orth and Dowd) on two Tinas (Turner and Fey). Vanity Fair’s Women on Women features a selection of the best profiles, essays, and columns on female subjects written by female contributors to the magazine over the past thirty five years.

From the viewpoint of the female gaze come penetrating profiles on everyone from Gloria Steinem to Princess Diana to Whoopi Goldberg to essays on workplace sexual harassment (by Bethany McLean and others) to a post-#MeToo reassessment of the Clinton scandal (by Monica Lewinsky). Many of these pieces constitute the first draft of a larger cultural narrative. They tell a singular story about female icons and identity over the last four decades—and about the magazine as it has evolved under the editorial direction of Tina Brown, Graydon Carter, and now Radhika Jones, who has written a compelling introduction.

When Vanity Fair’s inaugural editor, Frank Crowninshield, took the helm of the magazine in 1914, his mission statement declared, “We hereby announce ourselves as determined and bigoted feminists.” Under Jones’s leadership, Vanity Fair continues the publication’s proud tradition of highlighting women’s voices—and all the many ways they define our culture.

Were I Not A Girl: The Inspiring and True Story of Dr. James Barry

Just as I Am: A Memoir