You Don’t Belong Here: How Three Women Rewrote the Story of War 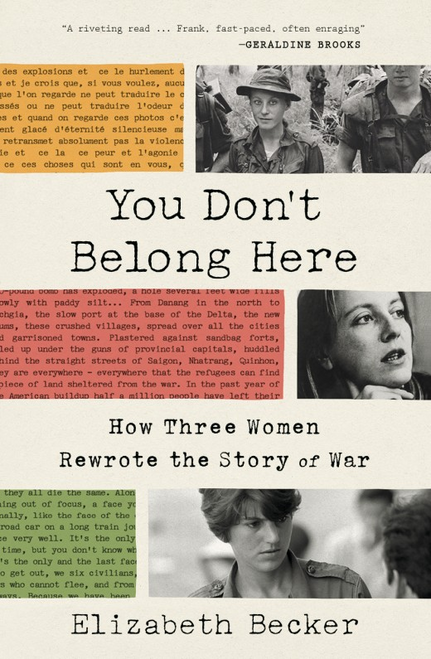 Kate Webb, an Australian iconoclast, Catherine Leroy, a French daredevil photographer, and Frances FitzGerald, a blue-blood American intellectual, arrived in Vietnam with starkly different life experiences but one shared purpose: to report on the most consequential story of the decade. At a time when women were considered unfit to be foreign reporters, Frankie, Catherine and Kate challenged the rules imposed on them by the military, ignored the belittlement of their male peers, and ultimately altered the craft of war reportage for generations.

In You Don’t Belong Here, Elizabeth Becker uses these women’s work and lives to illuminate the Vietnam War from the 1965 American buildup, the expansion into Cambodia, and the American defeat and its aftermath. Arriving herself in the last years of the war, Becker writes as a historian and a witness of the times.

What emerges is an unforgettable story of three journalists forging their place in a land of men, often at great personal sacrifice. Deeply reported and filled with personal letters, interviews, and profound insight, You Don’t Belong Here fills a void in the history of women and of war.

‘When these three women were born, “lady journalists” wore flowery dresses and white gloves, and wrote about fashion and housekeeping. Today, because of the tenacity and bravery of women like Leroy, Fitzgerald and Webb, women report from the frontlines of the bloodiest conflicts … and they aren’t wearing white gloves.’ —Tony Clifton

‘Becker, a master international journalist herself, profiles the extraordinary courage, talent, and raw determination of three wartime female journalists, who succeeded in a man’s world and helped pave the way for women everywhere to receive the recognition and respect they deserve.’ ―Alan Lightman, bestselling author of Einstein’s Dreams and The Diagnosis

‘Here is a unique and valuable perspective on the Vietnam War. Elizabeth Becker has gracefully weaved admiring but clear-eyed portraits of three remarkable women who reported from its front lines. Their work, in Becker’s description of French photographer Catherine Leroy, “eschewed classic heroics,” recording both the courage and the human toll of war, earning the amazed respect of soldiers, and making an indelible contribution to our understanding of the war, then and now.’ ―Mark Bowden, bestselling author of Black Hawk Down and Hue 1968

The Contender: The Story of Marlon Brando (Paperback)

Come Out, Come Out, Whoever You Are

Women of a Certain Rage