How We Fight for Our Lives : A Memoir (Paperback) 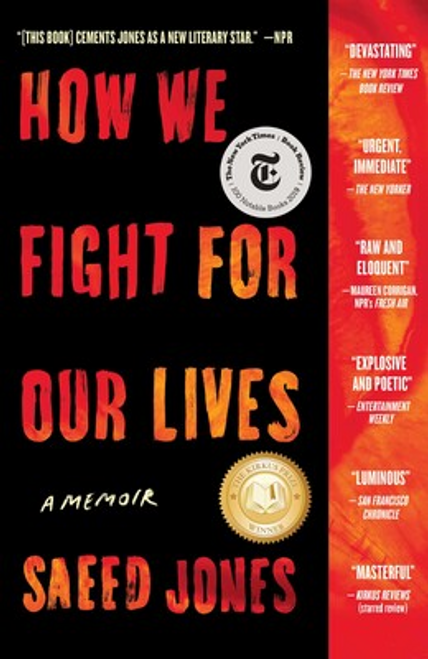 WINNER OF THE 2019 KIRKUS PRIZE IN NONFICTION

“People don’t just happen,” writes Saeed Jones. “We sacrifice former versions of ourselves. We sacrifice the people who dared to raise us. The ‘I’ it seems doesn’t exist until we are able to say, ‘I am no longer yours.’”

Haunted and haunting, How We Fight for Our Lives is a stunning coming-of-age memoir. Jones tells the story of a young, black, gay man from the South as he fights to carve out a place for himself, within his family, within his country, within his own hopes, desires, and fears. Through a series of vignettes that chart a course across the American landscape, Jones draws readers into his boyhood and adolescence—into tumultuous relationships with his family, into passing flings with lovers, friends, and strangers. Each piece builds into a larger examination of race and queerness, power and vulnerability, love and grief: a portrait of what we all do for one another—and to one another—as we fight to become ourselves.

An award-winning poet, Jones has developed a style that’s as beautiful as it is powerful—a voice that’s by turns a river, a blues, and a nightscape set ablaze. How We Fight for Our Lives is a one-of-a-kind memoir and a book that cements Saeed Jones as an essential writer for our time.

Recommended and Reviewed by Hendri:

These questions are part of the universe of Saeed Jones's How We Fight For Our Lives", a memoir of an American black gay man, which won the 2020 Lambda Literary Award in Gay Memoir/Biography. As a highly-talented poet, Jones knows how to invite readers to grasp and explain our most profound and unspeakable feelings through beautiful yet accessible prose. Moving from a Playboy magazine, a public library toilet, to a series of casual sex encounters, Jones chronicles his sexual and self-discovery journey, particularly when language is not enough to capture what he feels and when society demands erasure of himself continually.

Of course, being queer is not only about sex. It is also about how we form a relationship with our family members when they don't always understand the complexity behind our identities. This is also the central aspect of the book: Jones's relationship with his single mother, grandmother, and uncle. When acceptance and love cannot always be fully verbalised, there are consequently a variety of ways to express understanding, and also, misunderstanding, from which we learn how to love genuinely."

How We Live Now: Scenes from the Pandemic