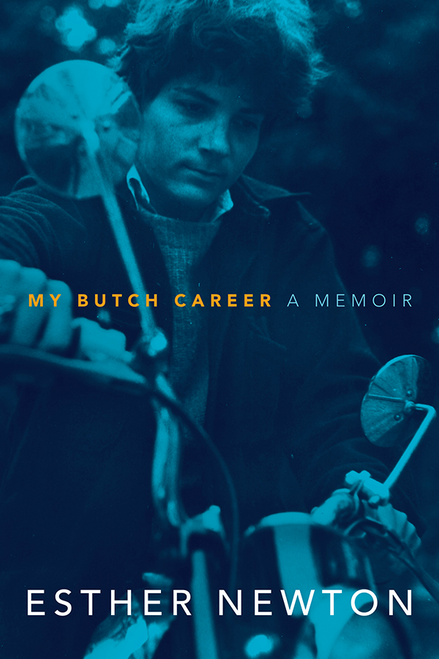 During her difficult childhood, Esther Newton recalls that she “became an anti-girl, a girl refusenik, caught between genders,” and that her “child body was a strong and capable instrument stuffed into the word ‘girl.’” Later, in early adulthood, as she was on her way to becoming a trailblazing figure in gay and lesbian studies, she “had already chosen higher education over the strongest passion in my life, my love for women, because the two seemed incompatible.”

In My Butch Career Newton tells the compelling, disarming, and at times sexy story of her struggle to write, teach, and find love, all while coming to terms with her identity during a particularly intense time of homophobic persecution in the twentieth century.

Newton recounts a series of traumas and conflicts, from being molested as a child to her failed attempts to live a “normal,” straight life in high school and college. She discusses being denied tenure at Queens College—despite having written the foundational Mother Camp—and nearly again so at SUNY Purchase. With humor and grace, she describes the influence her father Saul's strong masculinity had on her, her introduction to middle-class gay life, and her love affairs—including one with a well-known abstract painter and another with a French academic she met on a spur-of-the-moment trip to Mexico and with whom she traveled throughout France and Switzerland. By age forty, where Newton's narrative ends, she began to achieve personal and scholarly stability in the company of the first politicized generation of out lesbian and gay scholars with whom she helped create gender and sexuality studies.

Affecting and immediate, My Butch Career is a story of a gender outlaw in the making, an invaluable account of a beloved and influential figure in LGBT history, and a powerful reminder of just how recently it has been possible to be an openly queer academic.

"Disarming and compelling. . . . My Butch Career is the humorous and graceful story of a gender outlaw in the making, blazing the trail in queer academia." — The Advocate

"The most captivating part of the book sees Newton circulating through second-wave feminist and lesbian circles in New York and Paris, where the debates, social hierarchies, and tangled affairs she encounters bring her to a late coming of age. In the eighties, her scholarship, once ignored, achieves recognition with the rise of gender and sexuality studies. The book is a thoughtful examination of how personal experiences spur intellectual progress." — The New Yorker

"My Butch Career is an important narrative of liberation that contributes singularly to the growing body of collective LGBTQ history. It covers the first forty-one years of the writer’s life, a time frame that calls out for a sequel. Newton concludes her memoir with a tribute to the queer writers who have preceded her. With this work, she has secured her place in that pantheon." — Anne Charles, Lambda Literary Review

My Gay Husband: How my Gay Ex-Husband Became my Best Friend