Talkin’ Up to the White Woman: Indigenous Women and Feminism (20th anniversary edition) 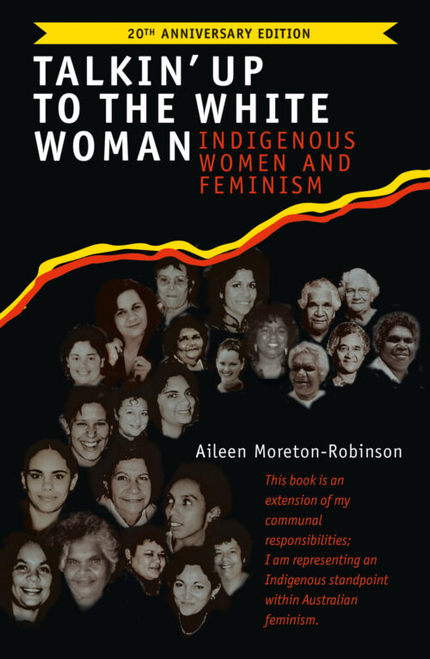 With a new 20th anniversary preface and review essay by the author.

In this ground-breaking book, Distinguished Professor Aileen Moreton-Robinson undertakes a compelling analysis of the whiteness of Australian feminism and its effects on Indigenous women.

From an Indigenous woman’s standpoint, as a Goenpul woman and an academic, she ‘talks up’, engages with and interrogates western feminism in representation and practice. Through examining an extensive range of feminist literature written mainly by white scholars and activists, Moreton-Robinson shows how whiteness dominates from a position of power and privilege as an invisible norm and unchallenged practice. She illustrates the ways in which Indigenous women have been represented in the publications and teachings of white Australian women, revealing that such renderings of Indigenous lives contrast with how Indigenous women re/present and understand themselves.

Persuasive and engaging, this book is a necessary argument for the inclusion of Indigenous perspectives in the teachings and practices that impact on Australian society. This new edition proves the continued relevance of this classic work as a critique of the whiteness of western feminism.

"Sharply written and brilliantly argued, Aileen Moreton-Robinson reveals the unmarked figure of 'the White middle-class woman' that continues to shape Australian feminism, making it racially blind and culturally biased. In this book, she follows the historical development of Australian feminist theory, and consequently, unpacks how social anthropology and the White feminists have codified and represented Indigenous Women in the 'traditional' versus 'contemporary' binary. Indeed, this form of binary has distorted the representation of Indigenous women by essentialising 'cultural differences' that subsequently calls for a civilising mission and saviourism. As sexuality is central to feminist theory, Moreton-Robinson critically examines of sexuality itself is always entangled with race. In other words, Indigenous women are positioned as 'sexual deviants', while White feminists seemingly only sees sexuality through the prism of bodily autonomy without attending the ways that bodies are always racialised and thus treated differently across different racial lines. Finally, this 20th Anniversary Edition of Moreton-Robinson's important book remains a call for all of us to integrate anti-racist views in feminist scholarship and activism."

"Still the most important book on Australian feminism, and a clarion call to stand with Indigenous women in the struggle against white supremacy."- Ruby Hamad

‘‘Moreton-Robinson has done us a favour by detailing her people's experiences with white feminism. Now it is up to white feminists to read her book and learn from her analysis.’’ -Professor Haunani Kay-Trask, The Contemporary Pacific

"A timeless reference that undertakes a compelling analysis of the whiteness of Australian feminism … essential reading." - Tara June Winch

My Tidda, My Sister: Stories of Strength and Resilience from Australia’s First Women

Enid : The Scandalous Life of a Glamorous Australian Who Dazzled the World

Growing Up Aboriginal in Australia